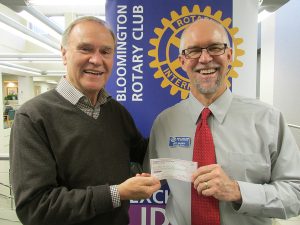 Dr. Rink, a pioneer in cardiac medicine, has served the IU men’s basketball team as a team physician since 1978 and has served the community and the university in many other ways.

Since completing his medical degree, residency, and fellowship at IU, Dr. Rink has used his extensive medical training to deliver treatment for the heart and cardiovascular systems of patients in Bloomington.

He has been involved in dozens of cardiac drug studies on a national scale while serving the Bloomington community as a Chairman, President & CEO, and Cardiologist at Internal Medicine Associates (IMA).

Half the proceeds from the Toast will benefit Dr. Rink’s chosen charity, Bloomington Boys & Girls Clubs; the other half will be split equally among the three Rotary clubs to be used for local charitable causes.